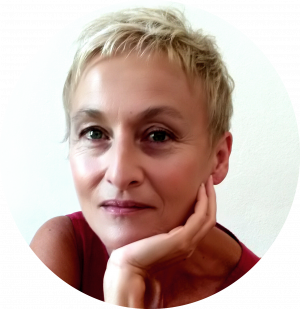 Bruna Gondoni, choreographer and dancer, followed the Sculpture course at the “Accademia delle Belle Arti” in Florence and went to the ballet and contemporary dance attending the Dance Theatre School and the Imago Lab. in Florence.
Since 1982 she’s interested in the Renaissance dance collaborating as interpreter, choreographer and teacher with the Renaissance Dance Company “Il Ballarino” founded by Andrea Francalanci, with which she participated to many creations and tournées in Italy, Europe, America and India.
In 1988 she dances with the French company “Ris et Danceries” of Francine Lancelot in the creation “Tempore et Mesura” for the “Biennal de la Danse de Lion” and for the “Maggio Musicale Fiorentino”. In 1989 she takes part to the television representation for the Thames TV of London “Una Stravaganza dei Medici”. Then she works at the National Theatre of Strasbourg, at the Baroque Festival of Versailles and to the Celebrazioni Monteverdiane at the Teatro Ponchielli of Cremona.  Since 1994 she directs with Marco Bendoni the Italian Renaissance Dance Company “Il Ballarino”. Then she dances and choreographs “Il Ballo dell’Ingrate” with the London Group Taverner Consort directed by Andrew Parrot and “La Dafne” directed by Gabriel Garrido for the Teatro Massimo of Palermo. In 1996 she creates for the dance company “Le Ballet du Rhin” the piece “De la Bellezza”.
In 1997 Marika Bresobrasova (director of “Académie Princesse Grace” of Montecarlo) invited her to choreograph the court dances during the 700 years of the reign of Grimaldi Princes’ celebrations. Nel 2006 she dances and choreographs the “Ballo delle Ingrate” in the festival Torino Settembre Musica with Hesperion XX, director Jordi Savall. She performs for the most renowned festivals in the world, both as a dancer and as a choreographer, she dance at the festivals of: Utrecht, Sablé, Ambronay, Baireuth, Haute-Jura, 67th Festival de Musique de Strasbourg, Wallonie, Medina of Tunisi, Palais de Beaux Arts of Bruxelles, Festivales Musicales de Buenos Aires, Camino del Barroco de Santiago, Baranquilla in Colombia, Cathédrales de Picardie, Kyoto, Boston Early Music Festival, Namur, Medieval Festival of Agia Napa (Cyprus), Palau de la Musica Catalana of Barcellona, Internationales Bachfestde Schaffhausen… She also performed with the most important personalities of the world of the music like Jordi Savall, Gabriel Garrido, Christina Pluhar, Denis Raisin Dadre, Jean Tubery, Alan Curtis, R. Clemencic, A. Parrot, Daniela Dolci, Chiara Banchini, Sigiswald Kuijken, Rolf Lislevand, Jean-Marc Haymez, Maria-Cristina Kier, Jean-Pierre Canihac, Frédérick Haas. We can find amongst her most important choreographies also: the F. Caccini’s opera La liberazione di Ruggero dall’isola d’Alcina and the Balthasar Beaujoieulx ‘s Le Ballet Comique de la Royne. In 2009 she’s been for a month in Taiwan to dance with the Chinese Company Huan-Tang Yuefu (theatre and dance Nankuan) and from 3 years she’s been to India with the Company Musica Fiorita and she has performed with Indians dancers of Bharatanatyam. As a regular teacher, she holds courses at the Haute Ecole de Musique of Geneve and at Dolmetsch Historical Society of London. She is invited as guest Choreographer and lecturer at the Centre de Musique Ancienne de Geneve, at the Académie de Danse Classique Princesse Grace and at the Conservatoire Ranier III in Monaco, at the Conservatoire in Copenhagen, at Dolmetsch Historical Dance Society of London as well as at the Academie de Sablé.
She danced and choreographed in the 2012 Carlo Carlei’s movie Romeo & Juliet and in the 2016 Garth Davis’ movie Mary Magdalene with actors Rooney Mara and 2020 Oscar winner, Joaquin Phoenix. Despite the difficult times of 2020, she partecipated, with the ensamble Ausonia, at the creation of the performance “Combattimento” for the Festival de Flandres, engaging in Japanese martial arts and Noh theatre. Her activity as a researcher coexists with her creative and choreographic work, thanks to her experience of different disciplines: historical research, renaissance, baroque, classical and contemporary dance, Tai-Chi, Dervish’s Yoga, Gurdjieff’s sacred dances and trekking in Nepal. For many years she is attending the “Free University of Samadeva” (Alsace-France) where she learns, under the guidance of the master Selim Aïssel: Samara Yoga, some energetic techniques and the New Spiritual Psychology. (All this gives a wider breath to his knowledge of the body, movement and beyond …)

I will give to the students photocopies of my reconstructions