Every earthly journey has its beginning and end. The International Summer School of Early Music in Valtice has been resisting the end for thirty-two years, which might be seen as constant rebirth, so its youth thus never wears off. I believe the summer courses will keep thriving as long as music of early style periods continues appealing to modern people and as long as they are able to perceive its beauty. However, discovering the legacy of what composers have passed on to us is not always an easy task and that is precisely why the Summer School in Valtice opens its gates to all who are enthusiastic about this process of discovery. They can immerse themselves in the beauty of several centuries of music, casting away the prejudice that what is new is automatically better, more progressive or even superior to the old. Fortunately, the Summer School in Valtice consists not only of those who want to discover but also those who are willing to pass down their experience and knowledge of medieval, renaissance, baroque and sometimes also classicist and romantic music musical expression.
The large team of people who do that will this year be enriched by Barbora Kabátková who, besides leading a choral class of Gregorian chant and early polyphony, will also offer individual classes of solo singing focusing on medieval music. Jana Semerádová will provide instruction in baroque transverse flute and chamber play. Jana Švadlenková, an inspiring teacher of French horn and brass ensemble play. The drama class will be led by Tereza Indráková while Andrea Miltnerová from the United Kingdom (who however, speaks good Czech) will be in charge of one of the dance classes. Special programme includes a series of lectures on 16 th – 18 th century tablatures given by Miloslav Študent who will also teach lute play. Last but not least, if you are interested in singing during masses in the local church, attend the class led by Ondřej Šmíd Sr. As you can see, the offer is broad indeed. So do not hesitate and sign for classes that inspire you. Looking forward to seeing you in July. 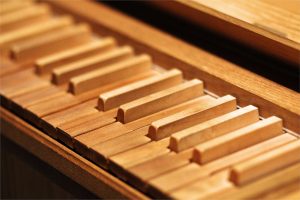