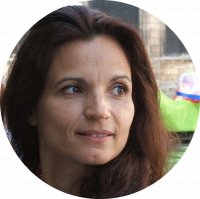 Ballet dancer, choreographer and tutor, took her first steps in early dance in 1992 in Urbino with B. Sparti, V. Daniels e D.C. Colonna. She studied Palaeography and Musical Philology at the University of Cremona (Italy). She also studied folk dances and she graduate in 2002 in Laban Modern Educational Dance (Danzaeducatore © Mousiké, Bologna).

She danced in the Il Ballarino in several productions especially in “l’Harmonie du Monde” a performance inspired by Leonardo da Vinci’s life.

She has gone on stage with the New York Dance Company of C. Turocy in “The Pleasure of the Dance” and in “The Temple of Glory” at Jarvis Theater in Napa, California.

Who knows what was the reason for which the Italian dancing master Evangelista Papazzone was left in Vienna, while the king Rodolfo II was preparing to move permanently with the court in Prague. It is certain that the manuscript dedicated to Rudolf II himself and composed in Italian, probably between 1572 and 1575, appears as an almost desperate attempt not to lose its role of choreographer. Composed in the spare time, given the reduced work commitment at the court of Vienna “appresso quelli pocchi paggi che restorno”, this document fits well into what the historian Curt Sachs calls the Age of the Gagliarda. From the second half of the sixteenth century, in fact, the production of treatises dedicated to dance and especially to gagliarda is increasing. In addition to the two best known and studied dancing masters, Fabritio Caroso and Cesare Negri, other authors such as Lucio Compasso, Livio Lupi, Prospero Lutji, Ercole Santucci and the less known Evangelista Papazzone offer us descriptions and very complex variations, sometimes difficult to decipher.

The course aims to reconstruct some of the Gagliarda variations proposed in Ars Saltandi by Papazzone, comparing them with the repertoire described in particular by Fabrizio Caroso and Cesare Negri. During the course, in addition to creations in style, variations will be proposed to “refresh” the Mutanze di Gagliarda in the repertory ballets. For example, Fabrizio Caroso in Laura Soave ballet from “Della Nobiltà di dame” leaves free the cavaliere to dance a mutanza according to his taste and ispiration:«Il Cavaliere solo, se saprà ballare la Gagliarda, farà una Mutanza, o partita che vogliam dire, di quattro tempi», suggesting only after one of his dancing creations. The goal is to enrich the expressive vocabulary with the brilliant and vigorous technique of the new Italian style of the sixteenth and seventeenth centuries, studying repertory ballets, and new gagliarda’s choreographies.

To participate it would be good to be already able to perform the basic step of Gagliarda.