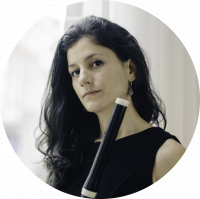 Originally from Argentina, Florencia started her flute studies at a young age. In 2011 she graduated with high marks in the Early Music Department of the Conservatorio Manuel de Falla in Buenos Aires. Since 2012 she lives in The Hague, where she earned her Bachelor and Master Diplomas on the Baroque Flute (2015 and 2017) at the Royal Conservatoire under the guidance of Wilbert Hazelzet and Kate Clark. Her master research on ‘The Characters of the Flute’ and the presence of flute imagery in Renaissance Iconography received an ‘excellent’ mark and has been published by the Research Catalogue, an international database for artistic research.

She has received grants and awards from the National Fund for the Arts in Argentina, the Prins Bernhard Cultuurfonds in The Netherlands, and others.

Florencia was a guest teacher of traverso for the flute class of the Fontys University in Tilburg. Since 2017 she has joined the staff of The Royal Conservatoire in The Hague, teaching there since then several courses, among which traverso – Young Talent Department- and flute clinics – Art of Sound Department. Her current teaching engagements there are the course on methodology in
education for early flutes (Education Department), the course on Historical Development of the flute course and the minor on early flutes.

She has taught masterclasses and lectures for the National University for the Arts in Argentina, the Janáček Academy of Music and Performing Arts Brno, the Royal Music Association in London.

Further information about Florencia Gomez can be found at:

Intermediate and advanced flutists are welcome. On renaissance, baroque, classical and/or romantic flutes. Class work can be done in A392, A415 Hz, or A430Hz, A440 Hz. The tutor asks that students bring complete sheet music, including basso continuo.

The class focuses on 17th and 18th century repertoire, with a possible extension into the early 19th century pieces.