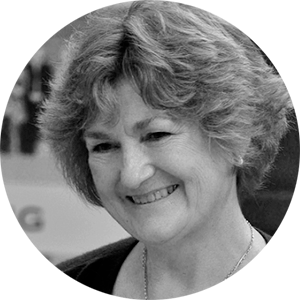 Poppy Holden studied at the Elder Conservatorium of Music, Adelaide, and at the Royal College of Music, London; with Nadia Boulanger, Paris; as a Fromm Fellow at Tanglewood Music Center, USA; and as a postgraduate at York and Newcastle Universities, having graduated from the Open University.
She has performed and recorded contemporary and early music with the Fires of London, Trevor Wishart, Wilfrid Mellers, the Consort of Musicke, Gothic Voices, the Tallis Scholars, Musica Reservata, the Taverner Consort and the English Concert. She premièred Oliver Knussen’s Second Symphony at the Windsor Festival and at Tanglewood; Knussen’s Pooh Songs at the South Bank; and Bruno Maderna’s Satyriconwith the Nederlands Opera.
Poppy was Head of Vocal Studies at Newcastle University from 2007-2013 and voice coach at Durham University since 2015, she also coaches members of the Royal Northern Sinfonia Chorus. Since 1991 she has been giving singing workshops for the Czech Music Society in Prague, and at the early-music summer school in Valtice, Moravia.

She has written for early-music magazines and presented Mainly for Pleasurefor BBC Radio 3, and she researches, composes and performs music connected to the Scottish Borders, and the Northeast where she lives. Today, Poppy has a thriving studio in Newcastle, where she coaches an enthusiastic group of students of all ages.

Further information about Poppy Holden can be found at:

Improve the beauty, flexibility, range and strength of your voice with simple, enjoyable practice.

Bring the repertoire you are currently working on. We will devise exercises during the week to suit your needs.