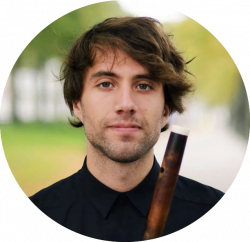 Pablo was born in 1991 in San Cristóbal de La Laguna, Tenerife. He started to study flute in the conservatory of Santa Cruz de Tenerife, where he finished his Intermediate degree with Catherine Biteur with honors and special award. In 2009 he was admitted in the Royal Conservatory of Madrid. He studied with Manuel Rodríguez Arribas and he graduated in 2013 with honors. While he was studying in Madrid he became interested in early music and he started to play traverso. In 2013 he was admitted for the Early Music Performance Master in Barcelona, where he studied traverso with Marc Hantai. In June 2017 he finished the master course of baroque and classical flute in Koninklijk Conservatorium Den Haag with Wilbert Hazelzet and Kate Clark with honors and distinction.
He takes part of The Goldfinch Ensemble, who got the first prize in the International Händel Festpiele Gottingen Competition in 2016 and the second prize in the International Early Music Competition in Loire Valley, with William Christie chairing the jury in 2015. Their international career was launched in 2015 when they played in festivals throughout Europe such as Festival de Sablé (FR), Festival de Ambronay (FR), Festival di Natale Pavia (IT), York Early Music Festival (ENG), Lagos Early Music Festival (PT) among others. Also, they have been selected for the EEEmerging project, a program supported by the European Union to support promising young European ensembles. In April 2017, the Goldfinch Ensemble will receive the ‘Chapelconcert Chamber Music Prize’ (Goirle).
He has played in some early music orchestras and ensembles like Orchestra of the Eighteenth Century, Balthasar Neumann Orchestra, Australian Romantic&Classical Orchestra, Bach Orchestra and Choir of the Netherlands, Armonia Atenea, Luthers Bach Ensemble among others.

The baroque/classical flute class is open to players of all different levels – from beginners who would like to start playing the traverso to advanced students who would like to practice more specific aspects of their playing. Modern flute players who are interested in historical performance practice are also welcome (if that is the case of any of the students, please contact me in advance: registrace@early-music.cz).
We will mainly focus on rhetoric, ornamentation, style and other technical aspects such as articulation and sound nuances.

Both solo and chamber music repertoire from the 18th and 19th centuries.