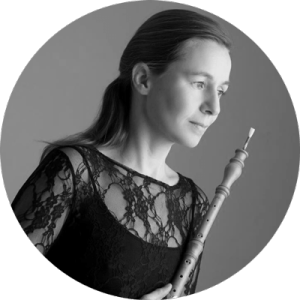 Born into a musical family in Erfurt, Germany, Luise Haugk studied modern oboe at the Spezialschule für Musik in Dresden, the Hochschule für Musik Carl-Maria von Weber in Dresden, as well as at the Academy of Music Hanns Eisler in Berlin. During her studies, she became interested in historical performance practice and studied baroque oboe with Alfredo Bernardini between 2003 and 2005 at the Conservatory of Music in Amsterdam. While studying baroque oboe, Luise Haugk began to cooperate with various ensembles focused on historical performance practice, including the Lauttencompagney Berlin, the Dresdner Barockorchester, the Akademie für Alte Musik Berlin, Concerto Köln, the English Baroque Soloists, Collegium 1704, Elbipolis, and Les Amis de Philippe. As freelance musician and solo player she was performing throughout Europe and in Japan. She also made numerous radio broadcasts and CD recordings. In February 2010 she recorded Antonin Reichenauer’s oboe concerto with the Czech ensemble Musica Florea. Luise Haugk lives in Dresden and has two sons.

We‘ll work on oboe repertoire from the baroque period, which means French, Italian and mixed-style pieces, such as suites, concertos and sonatas. The difficult orchestral solos (Bach, Handel) are very good subjects to study the typical specialties of this time and work on ornaments for the chamber music and solo repertoire, as well as have a closer look at some basic technical issues of playing the baroque oboe. Classicist oboe is welcome, and modern oboe too – for musicians, who want to get some stylistic advice. We want to play together in an oboeband, so oboe da caccia or taille and, if you have, nice pieces to play for oboeband, are very welcome! I will bring a lot of music with me anyway, but it‘s always nice to play something new. During the week we‘ll find some time for a reed-making session, please bring your own materials and tools with you. I‘m looking forward to meeting you. In between- good reeds, enjoy the music… Players with modern instruments can sign up as well. Unfortunately I don’t have any historical instruments to lend.