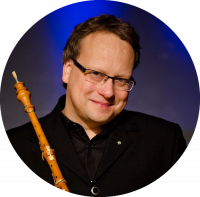 One of the first oboists in Poland, professionally involved in playing historical oboes. Concerting soloist, chamber musician, orchestral musician and active propagator of early music, as well as an organizer of various artistic activities.
A graduate of the Academy of Music in Poznań in the oboe class of prof. Mieczysław Koczorowski, the Royal Conservatory in The Hague in the class of baroque and classical oboe Ku Ebbinge and the Hochschule für Musik und Theater in Leipzig in the class of Wolfgang Kube. He graduated with honors from Postgraduate Studies of Cultural Managers at the Warsaw School of Economics. In 1996, he was awarded the Poznań City Councilors’ Prize for artistic achievements, and in 2002, the Zofia Rayzacherowa for the greatest artistic individuality in the field of early music.
Since 1998, he has been cooperating with the Warsaw Chamber Opera as the first oboist and coordinator of the Musicae Antiquae Collegium Varsoviense orchestra. In 2020, he founded the Warsaw Harmony ensemble, with which he presents 18th and 19th-century works for wind instruments. Moreover, he collaborates with most orchestras and early music ensembles in Poland. Among foreign formations, it is worth mentioning: Akademie für Alte Musik Berlin, Musica Florea Prague, Collegium Marianum Prague and Ensemble Inegal from Prague.
He is the artistic director of the Varmia Musica festival and the Varmia Musica Academia music workshops in Lidzbark Warmiński. He teaches the baroque oboe class at the Academy of Music in Poznań.

Everyone who wants to explore the secrets of playing instruments with the word “oboe” in the name and many related instruments is invited to the historical oboe class. During the course you can get acquainted with such instruments as: baroque oboe, oboe d’amore, oboe da caccia, classical two- and eight-keys oboe, english horn and 19th-century oboe. Both purely technical and performance issues supported by extensive orchestral experience are the starting point for our musical meetings.

Both period and modern instruments are accepted. It is possible to borrow the instrument after prior contact with the tutor.

“How to play the oboe so as not to go crazy?
How to go crazy and then play beautifully?
Are the keys and the reed really necessary?
What oboe to play Mozart on?
Are the “baroque” a sect?
Can you play early music on contemporary oboe?
Why is contemporary oboe not contemporary?
To vibrate or not to vibrate – that is the question. Is what the professor says true?
How to live?

In Valtice, I will try to provide comprehensive answers to all questions. I invite!”

F. Couperin, G. F. Händel, CPE Bach, …but first of all – not published pieces for oboe, which can be found in e-libraries like IMSLP.