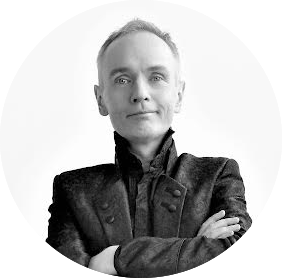 JAKUB BURZYŃSKI – conductor, countertenor, music theorist and keyboard player, born in 1976 in Zabrze, Poland. He graduated with disctinctions of the faculties of Theory of Music and Solo Singing.

Founded his first ensemble at the age of 18, he later became member or founder of numerous music groups until 1998 when he brought to life early music ensemble La Tempesta. With this ensemble he gives concerts and makes recordings of the repertoire ranging from Renaissance polyphony to the 19th century oratorios.

His first solo album, including Stabat Mater and Nisi Dominus of Antonio Vivaldi, was acclaimed the ‘Recording of the Year’ by British portal Music Web International, one of the tracks from this album was used in the Cannes Festival awarded French movie Divines (2016). Numerous recordings by Jakub Burzyński were released by DIVOX, NAXOS, BIS, ARTS, DUX, MUSICON and other labels.

Jakub Burzyński is a constant speaker on the Festival of Silent Music in Toruń and artistic director of Barok w Radości Festival in Warsaw as well as International Summer School of Early Music Schloss Scharfeneck. Since 2009 he has given masterclasses of Baroque singing in Czech Republic and Poland.

In 2019 he was nominated to OPUS KLASSIK award as Conductor of the Year. In 2020 he has made the first Polish studio recording of complete Messiah by G. F. Handel. Also in 2020 he created the documentary about the polychoral style of Mikołaj Zieleński and started a new video cycle called Fabryka Madrygałów (Madrigal Factory).

Further information about Jakub Burzyński can be found at:

Major work in the class will be focused on the style, meaning of words, expression and interpretation of the repertoire from Baroque and Classical era.

The tutor will not deal with singing technique.

Students are asked to bring up to four own arias/songs of Italian, German or English composers. There will be also one ensemble piece to be prepared by all class members.