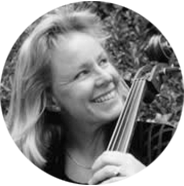 Irmtraud Hubatschek was born in 1960 in Klagenfurt, Austria. She began to learn music at age of five, and went on to study the cello with Max Engel at the Innsbruck Conservatory, then with Nikolaus Harnocourt at the Academy Mozarteum in Salzburg. A growing interest in performance practice led her towards baroque and classical instruments, and after studying in London, she received a scholarship from the Dutch government to study the baroque cello with Jaap ter Linden at the Royal Conservatory in The Hague where she gained her concert diploma. Masterclasses with Anner Bijlsma, Gerhard Darmstadt, Christophe Coin and Wilbert Hazelzet provided further musical inspiration.

She has been awarded with several prizes (Jugend Musiziert, Austria, International Chamber Music Competition Amersfoort, Netherlands). Concert tours with various groups such as Trio Boismortier, Il Dolcimelo, Akademie für Alte Musik Berlin, Armonico Tributo Rotterdam… have taken her to most European countries and to Nepal. In addition to her performing career, she has taught the baroque cello since 1991 at the International Summer Academy for Ancient Music Prague, and from 1998 to 2005 at the Centre for Early Music at Cannes Conservatory.

Living since 1994 in Corsica, she has created in 2002 her own group ORFEO ISULANU. Her current focus of research lies in exploring 18th and 19th century musical life in Corsica, documented on several CDs, Notturno di Corsica I-IV.

She has created two films on music, “Viva Mozart” and “Biber et Muffat”. She very happily combines research in music, history, literature and even gastronomy in order to create a musical play around a theme to bring the baroque period closer to us today.

I am delighted to teach the baroque cello class at the Summer School in such an inspiring place as is the small town of Valtice: past and present meet here in a most natural and lively way!
This course invites cellists, both modern and baroque, as well as bass players for solo playing of baroque music and, equally important, continuo playing and chamber music.
My aim is to accompany students of intermediate, advanced and professional level in their quest of historically informed playing, in the search for “the” sound and what N. Harnoncourt called the musical speech.

No matter if you have already any experience in gut strings and a baroque bow or not, I invite you to discover a different world of sound, or to perfectionate your baroque playing. Modern bows and instruments are welcome, but they need to be tuned at a=415 Hz during the whole class. For modern players I suggest coming with an open mind, ready to change and experience a lot of new things during this week!

An equally important part of my teaching is also chamber music – this starts with cello duets within the class and can be enlarged to mixed groups with other instruments or singers. If time allowing, there can be occasional teaching also in the afternoon for groups who have rehearsed in advance and are well prepared.

Program: themes as diverse as the following will be treated during the course:
All strings are welcome
Baroque cello technique
The musical speech: music as a language
The art of continuo playing
Body language in music: correspondence between bowing and respiration
Historical bowing technique with group-exercises
How to practice…

The class is open also to bass players, for solo playing of baroque music and, may be most important, continuo playing.

Important:
please no adaptations of works written originally for other instruments
please do bring the continuo part of your solo sonata!

You are most welcome to bring also violoncello-duets and accompany each other in solo sonatas, you are also encouraged to bring some continuo-parts to study