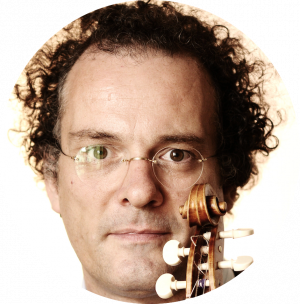 Daniel Deuter, born in Mülheim a. d. Ruhr, studied violin with Tibor Istvánffy and Geoffrey Wharton. His interest in interpretation of early music led him to collaborate with Philippe Herreweghe, Jordi Savall, Frieder Bernius, Reinhard Goebel, Konrad Junghänel and René Jacobs. During chamber music projects with Peter Kooi, Jed Wentz, Marie Leonhardt, Silas Standage, Daniel Hope, Michala Petri a.o. he visited many European and Asian countries, as well as the Canada, USA and South America. Daniel Deuter leads orchestral workshops, coaches young ensembles and teaches baroque violin (International Summer School of Early Music Valtice, Le parlement de Musique, Michaelsteiner Sommerakademie, Bednarska Summer School in Warsaw). Together with his Ensemble CordArte from Cologne, he performs chamber music of the 17th century.
Since 1993 he has been Concert Master of the Batzdorfer Hofkapelle which is dedicating itself to stage performances of operas and other works, mainly from the Dresden repertoire. Since 2013 he has been teaching Baroque violin at the Music Academy in Bydgoszcz, Poland. His work is documented in many CDs from Supraphon, musicom, pan-classics, Raumklang, Kammerton and Accent.

Further information about Daniel Deuter can be found at:

I am very delighted to be in charge of the Violin Class of the Summer Academy in beautiful castle of Valtice this year and to accompany pupils, students and lovers of early music in the field of violin and viola on their way through the whole wonderful repertoire from Monteverdi to Myslivecek to support them with their taste of period style, ornaments and technical questions.
Even with little experience; interest and openness is a good requirement for making many beautiful experiences in Valtice that has a musically impact and can be used immediately in chamber music with other participants.