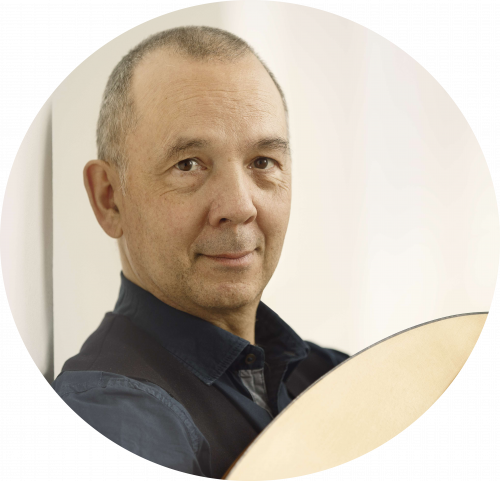 The musical activities of Axel Wolf, one of the most prominent representatives of his instrument, offer a wide spectrum ranging from solo performance and chamber music to the opera pit, with partners such as Dorothee Oberlinger, Irvine Arditti, Sebastian Hess, Rüdiger Lotter, Stefan Temmingh and Joel Frederiksen. He has performed at international festivals including those in Brügge, Utrecht and Edinburgh, in Rome, Tokyo and New York, appearing as soloist or with ensembles such as the Musica Fiata (Cologne), the United Continuo Ensemble, the Freiburg Baroque Orchestra, the Orchestra of the Age of Enlightenment and the English Concert London. Starting in 2000 he has been a regular guest at the Bavarian State Opera in all the Händel performances conducted by Ivor Bolton, Harry Bicket and Christopher Moulds. Axel Wolf completed his studies in guitar and lute with Hans Michael Koch. Alongside further studies with Nigel North and Hopkinson Smith, there followed additional studies with Rolf Lislevand.
He composed and produced the music for the documentary film “Sonbol”, was soloist and accompanist in diverse television pro- ductions of the Bavarian Broadcasting Company (BR) and was in the “3nach9” broadcast by Radio Bremen. In operatic, concert and CD productions, he has worked together with conductors such as Peter Schreier, Alan Curtis, Enoch zu Guttenberg and Joshua Rifkin. Alongside numerous CD productions as a continuo player and accompanist, he has also made five solo recordings: Lute Music by Michelangelo Galilei, „Friends of the Lute“ with music by Silvius Leopold Weiss, “Opera for Lute” with works by Johann Adolph Hasse, lute music by Johann Sebastian Bach and works for lute and chitarrone by Alessandro Piccinini, accompanied by the United Continuo Ensemble. Improvisations together with Hugo Siegmeth on saxophones and bass clarinet will be followed by an adaptaion of Schubert´s “Winterreise” with Stefan Hunstein as a narrator and Hugo and Axel in jazzy reflections on Schubert, which will appear in November 2020.

Further information about Axel Wolf can be found at:

Solo or chamber pieces (duets etc.) from the 16th – 18th century repertoire for renaissance lute, archlute, theorbo, baroque lute, mandora or baroque guitar. Vocal or instrumental works in which a lute instrument plays the basso continuo part. Students are encouraged to bring their own compositions they wish to work on.