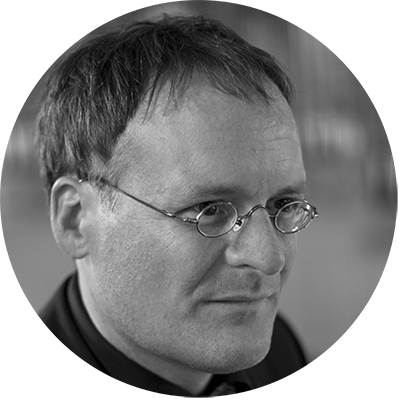 Jürgen Banholzer studied the organ in Boston (USA) with James David Christie, at the Musikhochschule in Stuttgart with Ludger Lohmann (on a scholarship from the Studienstiftung des Deutschen Volkes) and with Jean Boyer at the Conservatoire National Supérieur de Musique in Lyon. He went on to study singing at the  Schola Cantorum in Basel and was later awarded a PhD in musicology at the University of Mainz.

As an organist he has given recitals in Germany, Austria, France, Italy and Switzerland. His main interest lies in organ music and organs of the 17th and 18th centuries. As a continuo player on harpsichord and organ he has been a guest in groups like the Johann Rosenmüller Ensemble, Freiburger Barockorchester, Balthasar-Neumann-Ensemble, L’Arpa festante, La Dolcezza or Stefan Temmingh & Ensemble.

Together with the Austrian dulcimer player Margit Übellacker he founded the ensemble La Gioia Armonica, which produced under his direction world-premiere recordings of hitherto unpublished works by Antonio Caldara, Johann Georg Reutter, Giambattista Martini and Antonio Sacchini, in collaboration with the lables cpo, Ramée and with Radio Bremen. The critics commented on these CDs: „a delightful range of charming colours and intriguing textural effects“ (Early Music); „brilliant interpretation“ (Goldberg); „breathtakinkly lovely“ (BBC Music Magazine).  The ensemble has since been invited to festivals like the Händelfestspiele Halle, Ton Koopman’s Itinérarie Baroque, the Dordrecht Bachfestival, the Timisoara Early Music Festival, Bagnacavallo Classica or the Mitteldeutsche Heinrich-Schütz-Tage.

Since 2017 Jürgen Banholzer has taught singing and vocal chamber music at the International Summer School of Early Music in Valtice (Czech Republic). He has taught at the Mainz Conservatory and at the Musicology Department of Mainz University.

Until 2010 Jürgen Banholzer performed as a countertenor soloist in concerts, radio broadcasts and CD recordings under conductors such as Thomas Hengelbrock, Ivor Bolton, Harry Christophers and Jean-Claude Malgoire, as well as with notable period orchestras and ensembles such as Concerto Köln, Il Seminario Musicale, Das Kleine Konzert, Concerto poetico Zürich, L’arpa festante, L’Orfeo, La Gamba. His recording of solo cantatas by Antonio Caldara was released to great acclaim. He appeared in opera productions at the Ludwigsburger Festspiele, the Festival de Musique du Haut-Jura, the Wiener Festwochen, the Bayerische Staatsoper / Prinzregententheater, the Feldkirch-Festival and in the Festspielhaus Baden-Baden. As an ensemble singer he worked with groups such as the Huelgas Ensemble, the Johann Rosenmüller Ensemble, Capella Ducale &amp; Musica Fiata, the Clemencic Consort, La Fenice, Weser-Renaissance, La Chapelle Rhenane, Balthasar-Neumann-Chor, and the Amsterdam Baroque Choir at festivals throughout Europe and in the USA and China.

Further information about Jürgen Banholzer can be found at:

The class is open to organists, but also to harpsichordists and even pianists who wish to aquaint themselves with ways of playing on a baroque organ.

You may bring any music you like which suits an organ with broken octave C D E F F# – c3 (even d3) on two manuals and a pedal encompassing the range of CDEFGAB♭B-a. Be aware that the tuning of the organ will favour tonalities with few accidentals and that chords like A-flat-Major, F-sharp major or C-sharp major will sound very harsh. You are kindly asked to let me know the choice of your pieces two weeks before the course starts (registrace@early-music.cz). Students are encouraged to bring their own compositions they wish to work on.