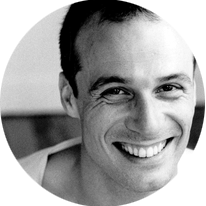 Bilingual (French and Italian) actor and stage director. He studied acting from 1989 at the Grenier Théâtral Maurice Sarrazin and the École Claude Mathieu in Paris, with, among others, Daniel Postal, Claude Mathieu and Thérèze Barbey. Recently, he appeared in „Pyrame et Thisbé“ and „Le bourgeois gentilhomme“, directed by Benjamin Lazar, „Bar franco-italien“, directed par Jean-Claude Penchenat, „Les femmes savantes“ performed by the Fabrique à théâtre and „Dette d’amour“ by Eugène Durif, directed by Beppe Navello. After co-working as an assistent stage director on several productions, including children spectacles, he directed and arranged Ibsen’s „Peer Gynt” by Ibsen, in 2002, and „Pas sages” based on a choice of contemporary texts, in 2004. Following his Baroque gesture and declamation studies with Jean-Denis Monory et Benjamin Lazar, he appeared in several of their productions, such as Moliére’s „Le Bourgeois Gentilhomme” (Le Poéme Harmonique, Vincent Dumestre, directed by Benjamin Lazar), and, in 2007, he directed the production of Antonio Caldara’s serenata “La contesa dei numi”, performed by Collegium Marianum at the Baroque theatre in Český Krumlov, South Bohemia. In 2011, he took part in staging of the opera “Egisto”, directed by Jérôme Correas; presently, he is preparing „Les Fâcheux“ by Molière with the Fabrique à Théâtre and „Les frères Karamazov“ for the Théatre de l’Arc-en-ciel

As in the preceding years, the acting class will participate in the final performance, which will evolve around the theme of “Virtues & Vices” or also “Light & Dark”.

The impressive baroque gestic will accompany beautiful theatrical texts and dialogues written by authors all around Europe.

The class is intended for students aged 16-69 years.